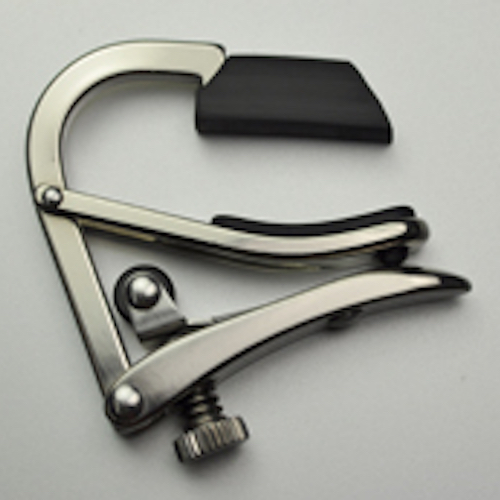 I was introduced to the concept of partial capoing many years ago by the great acoustic guitarist Harvey Reid and by Jeff Hickey, who developed the Third Hand capo (an elastic capo designed exclusively for partial capoing). These guys both were users of Shubb capos for "regular" capoing, but were WAY into the possibilities of partial capoing. In addition to using a Third Hand, I noticed that Harvey had modified one of his Shubb capos by cutting it down so that it skipped the outside string and covered only the next three. He got some really wonderful sounds with this partial capo. Shortly thereafter I saw Chris Proctor using one he had customized, evidently inspired by Harvey.

A few years later I met Adrian Legg, who was introduced to me by John Pearse as "the best guitar player in Europe," which is no exaggeration. I noticed that he, too, was using a sawed-off Shubb capo quite a lot, as an integral part of his amazing guitar style.

Adrian, Harvey, Chris, and Jeff had urged me for quite some time to put an end to this wanton mutilation of Shubb capos, and to actually make one ourselves that would do the job.

It wasn't good enough to just cut off a portion of our guitar capo; we built a crook into the frame that allows the capo to clearly skip the outside string without buzzing, while covering the next three. Then we altered the pad to line up with this new geometry. We nicknamed the odd looking new capo the Dogleg because of its angular bend. We didn't use that name officially when it went to market, but for a few years we still called it the Dogleg around the shop.

In 1995 we introduced our partial capo, and it has been growing in popularity ever since.

It skips the outside string and covers the next three, either 2-3-4 or 5-4-3 (emulating DADGAD tuning)